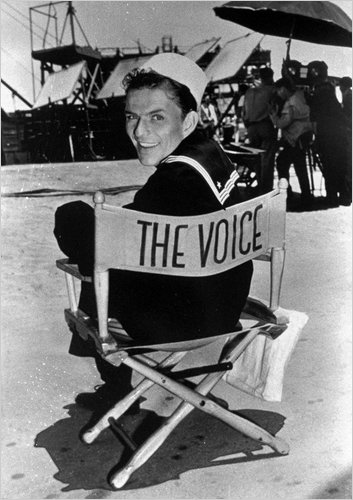 [As Real Groove went to press with its January 1998 edition, Frank Sinatra was near the end of his life, and the editor Chris Bourke put together a collection of memories of him by Clare Avery, Tom McWillaims, and this one, from the late Rick Bryant.]


No files on Frank

Until I was about 36 something, I deplored Sinatra. Not for his music, but because of what I thought he stood for, bogus American low-life loungism. It didn't matter that The Beatles thought he was a great entertainer, whatever that meant. Sinatra, or at least the tired, would-be enduring populist he had become, was a symbolic focus of the ridicule heaped on ‘old people's’ tastes. In the late 60s and during the 70s, his fans seemed to be a principal target of the hippest satirist of the time, Frank Zappa - whose Bizarre label, ironically, was with Reprise, the property of Frank Sinatra. If you can't beat them, own em.


But eventually life makes you confront your mindless prejudices, and so it came to pass that a friend - thinking, as friends sometimes do, that people should be forced to grow up whether they want to or not, and perhaps that my own music take a more adult, or viable, or more decorous direction – made me listen to what the knowledgeable consider Sinatra’s strongest material, the Nelson Riddle arrangements for Capitol from 1953 until he went to Reprise.

When my friend first lent me the record, I couldn't believe my eyes. Nelson Riddle? That name conjured up endless decades of 2ZB, Wellington's commercial radio in the 50s. Nelson bloody Riddle! Endless wet bloody afternoons, stuck inside watching Mum doing the ironing. Even then there was nothing to plumb the depths of ennui like mainstream commercial radio.

Changing my mind about Frank didn't take very long at all, in fact it was nearly instantaneous. Without impairing my enduring loyalty to Aretha, Bobby Bland, Wilson Pickett and the rest of the R&B pantheon, I had a brand new study

The first thing you have to notice, once you open your ears, is that Frank at his peak had soul, wherever it derived from, and the exact proportions of Sicily and Billie Holiday in the mix don't really matter. The point is his best singing is dynamic in every sense. Not a very big bloke, he had a disproportionately big musical presence, later matched by his cars, bodyguards, and legal bills for thumping the kind of innocent bystanders who just happened to be lurking near where and when Frank was feeling frisky.

So, Frank was not a wimp, or dull. How could he be? Even if he was not a lethal thug, as is widely believed, he was certainly the intimate associate of organised crime bosses. To survive in such a world, more is required than sharp reflexes. Even if you think that such a life is lived on a hyper super rodent level of cerebral function, you must concede that it is not an arena where the sluggish fare well.

So am I saying that underneath the uncompromising carapace there beats a soft but manly heart? Er, no. If you remember the look he shot Ray Charles - who may well have felt it - during Frank's 80th birthday TV special (I think it was, I'm not terribly keen on Showbiz birthdays), when Ray mentioned that Frank was a white man, in a white suit, on a white set, singing a black man’s song, you will not imagine that Frank is reduced to slippers and dribbles in the malice department.

So, putting bigness of heart aside for the moment, he had a big voice, very big. But he didn't just wave it round in public as if that was the sole point of the exercise. Not really noted as an actor, despite his Hollywood visibility, He had an actor's way with a strong lyric that made him the master rhetorician of the sophisticated, sometimes whitewashed, but not often mindless blues that comprises his core repertoire.

Anyone having doubts about his musicianship should listen to those recently released Frank-at-work tracks where he can be heard gently, firmly and expertly dealing with the complex arrangement details on the hoof. Whoever was producing on the day, Frank was on the case.

He has lead the kind of life about which misinformation abounds, and some of it is true. Possibly because of this, his musicianship and his unique instrument are now undervalued.

And he had another most valuable characteristic in a musician, which is humility. He had the good sense to realise that no matter how successful you are, in music there is the judgement of millions of manipulated consumers, and the judgement of your peers. Johnny Hartman, though not actually a household name, was one singer to whom he had to defer. When it came to seduction music, Frank apparently played Frank.
Peter McLennan at 9/05/2020 08:51:00 am
Share