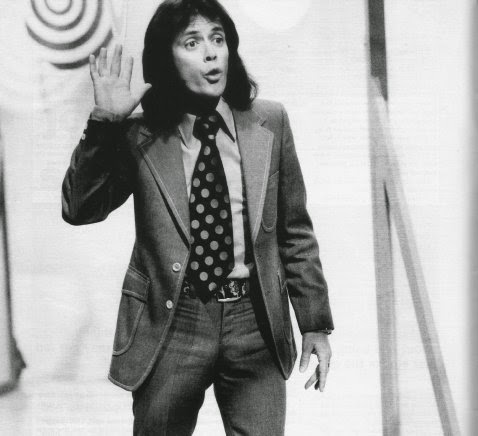 News reports in mid April stated that entertainer Ray Columbus was terminally ill, sad news. This piece covers the years after Ray had his first taste of success with She's A Mod, when he hit San Francisco at the height of the hippy era. Columbus's output from those years was reissued on the 'Ray Columbus The Solo Years' compilation by EMI NZ in 2004.

After massive success with the Invaders on both sides of the Tasman, the now solo Ray Columbus chose to head for San Francisco in 1966 and try and break into the music business. Although there was an attractive offer from promoter Harry M Miller to base his career in Melbourne, Columbus was drawn to the USA, the home of the music and popular culture that had inspired him.  He arrived in San Francisco a year before Scott McKenzie's hippieploitation hit with the memorable travel advice - 'If you go to San Francisco, be sure to wear a flower in your hair'.

"I could have moved to Melbourne, Harry M. Miller for two years had been trying to get a contract right for me, that I would accept. I had also been negotiating my USA Green Card. Thankfully it came through just before I got the final contract."

America was the choice Columbus made, walking out on a career in Australia, leaving Miller's offer of a TV show, concert work with a reformed Invaders and a business partnership behind.

''I'd always been a fan of American things and I saw it as a way to escape the hysteria and get my life into some sort of balance and learn about the music business which I love."

Even watching American TV was an exhilarating experience for 23 year old Columbus.

''From the moment I arrived in America I could watch Johnny Carson every night, with Sammy Davis Jr and all these great stars I loved - Blood Sweat and Tears, and Janis Joplin - and go to all these places. I loved it because it was show business."

Columbus travelled to the USA with his first wife Le 'Vonne and their six month old daughter "I'd always promised my FIRST wife that we'd go to America and she'd find her father. Her father was an American soldier. She was born in 1944. The lingering memory in her life was her father leaving, walking across the park at Point Chevalier when she was four.''

San Francisco must have been totally different from the British Invasion of the early 60s? "The psychedelic trip! San Francisco was psychedelic. I was not into drugs, I was able to be both in it and a bystander and remember it!" Columbus soon started a productive business relationship with a new manager, Al Zehner releasing his new recordings on a label called Colstar that they co-owned.

"Al brought the Beatles to the West Coast. He is still my dear friend. He is in his early 80s.'' Although prolific in his two years in California, airplay for his recordings was confined to the San Francisco region. "We were just small time."

Colstar may have been small but via one of Zehner's Topstar Management business partners, an Italian American who would later disappear, they had big friends on the East Coast.

''I got a call from Ed Sullivan's producer saying to me, 'You have very powerful friends in New York'. I said, 'Do I?' They said 'Yes, Mr Sullivan wants you to know he would really like to have you on the show, but because you are a rock act, unless you have a chart record, he cannot put you on. Because he's been inundated with all these great stars like Dean Martin and Lucille Ball who'll got kids in bands saying, 'Can you put my kids band on your show'. So he's created a rule whereby unless they're in the charts with a record, he won't do it. Now you understand that.'

I said, 'Sure, I didn't expect you to put me on the show anyway'. He said, 'Well you've got strong friends who're putting some muscle in here. We believe you were a song and dance man once that you're a singer and a tap-dancer.' 'That's correct', I said. 'Well if you want to come on our show next week and sing and dance you would always be welcome'. 'But I don't want to do that anymore', I said. 'I'm not a song and dance man now. I'm a songwriter/singer and I'm just really here furthering that, writing, doing production performing. I've got a couple of bands that I'm working with and I'm enjoying that.' 'Could you please let your friends know this' he said. It was just amazing!'' 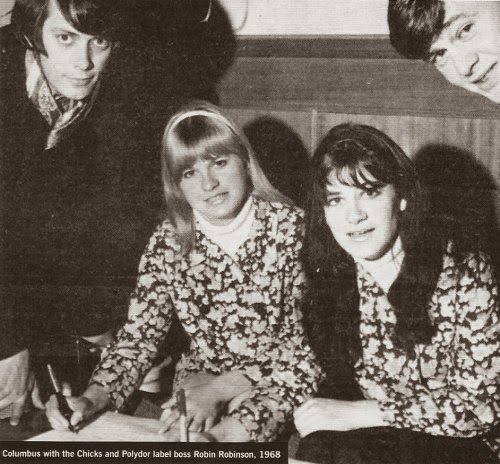 Columbus was working with young musicians called the Art Collection, who he recorded with, and by night he worked clubs with a second group.

''I was nurturing the Art Collection, teaching them to play British-type R&B. They were huge fans of British rock, the Hollies and the Beatles. I worked with another band two black guys and two Italian guys for night gigs because you had to be over 20 to play at bars and nightclubs.''

Singles Columbus released while living in California included 'Kick Me', 'We Want a Beat' and 'I Would Rather Blow a Bagpipe'. Also released on a double album San Francisco International Pop Festival on the Colstar label were the tracks 'Polka Dot Resistance' and 'Fast Pinkerton Street'.

Was the double album your manager's idea or your idea?

''He and his friends had promoted that festival and they wanted to do an album, a psychedelic kind of album that reflected the time I've got mixed feelings about it. If you go back and listen to people like Moby Grape, I think most of the groups on that album were as good as those guys.'

Was the festival a success? ''It was okay. It was in San Jose which was the psychedelic centre of that whole Bay area."

Were you in the right place at the wrong time? "I'd never change anything I did but I had no idea about any of that stuff. I just went there and that was what was happening. The flower child stuff all happened when I was there."

Recording in California was a revelation for Columbus. "I was producing on eight-track in stereo in late 1966, two years before the Beatles were in EMI, London. They were still on four track pre Sgt Pepper's.

“They were appealing to George Martin to get an eight track into EMI, but everyone ln California was recording on eight-track and stereo in those days and it was a total eye-opener for me to go from a two-track at Stebbings." 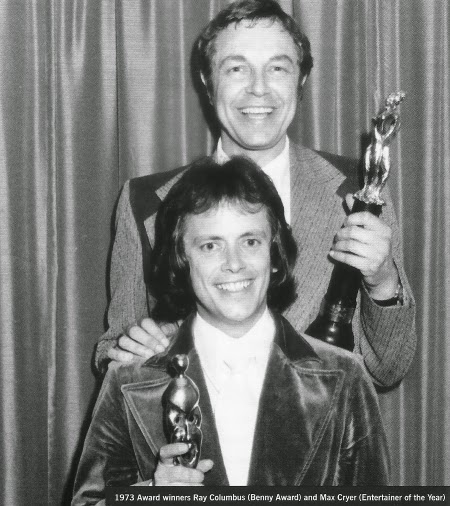 In 1968, Columbus returned to New Zealand for a six month television contract but he stayed in TV for 16 years. The hits kept coming with Columbus now recording at Bruce Barton's eight-track Mascot Studio, with American Bob Gillette engineering

"It was wonderful to work with Bob Gillette.Working with him I wrote songs like 'Happy in a sad kind of way', which went well, 'Los Angeles' which died but I'm immensely proud of that record and 'Travelllng Singing Man' in 1970."

Did your 70s TV career damage your recording career?

"In New Zealand if you were over 30 years you didn't make any more records. They were always looking for another Mr Lee Grant or another Craig Scott. TV exposure should have sold records, I should have become a more middle of the road artist as my fans grew up."

In the 1970s, Columbus joined the equally forward-thinking Hamish Keith on the QEII Arts Council and the commerce of music first got Government assistance as an artistic endeavour.

In 1973. as a Judge on TV's New Faces show, Columbus picked that Split Enz would have international potential and in 1978 he helped bail the band out with an urgent $5000 when they were in dire straits in the UK after leaving Chrysalis Records. The New Artists Recording Grants were also initiated with Brendan Smyth, now running NZ on Air's music schemes, at the helm. Columbus became the political face of popular music.

He was on the Arts Council, and as an APRA board member he was branded 'Mr Quota' as he pushed for more local music on radio.

In the mid 70s, Columbus records tracks in Los Angeles supervised by friend Bruce Johnston of the Beach Boys, with top rock players. The RCA album was meant to ''try and get things going again in Australia," but tracks like 'I Want To Be the Singer' and 'Happy Birthday Rock 'n' Roll' met with indifference at New Zealand radio.

"One radio station played the record once while I was there and threw it in the trash. I retired from making records and got on with my life as an entertainer.''

In the early 80s, Columbus returned to the Stebbing Studio to produce several successful records for country singer Patsy Riggir

There is irony in the fact that after Columbus returned from the USA he managed several artists including the Chicks, Shane and the Rumour. Now Columbus manages Zed, a band which includes Andy Lynch, the son of Suzanne from the Chicks and musician/ producer Bruce Lynch.

"Suzy and I go way back, we're like brother and sister now. For me, she's a diva. It may make me seem ancient but I was only 25 when I was managing Suzanne and Judy. ''

Is the artist management vacuum stall a problem 30 years later?

"It is such a small market a manager cannot earn a living. With Zed, the whole dream was to be an international band. I did not want them to be a pub band touring around forever.America was always the target.''

Columbus is committed to making sure that Zed do not get the token USA release that his 60s Australasian hits received. After ''Til We Kissed' achieved 'hit pick' status in USA trade magazines Billboard and Cashbox, Columbus visited Mercury In the USA to find out what happened.

"I went to see the Mercury executive, Frank Laffel 'What happened?' I asked. He said, 'We test marketed it in San Bernadino and some other town I'd never heard of and when it didn't take off after two weeks, we dropped it.'

I said, 'You mean, it was never really released? It was only in those two little towns?' He said 'That's right' I said 'You're kidding', I naively said, 'you're crazy' and abused the hell out of him And that's why I've been so careful with Zed. The undertaking we've got from Interscope is that they'll do the 'full monty'. Full release, album and singles and no test marketings!

"I've always had a passion for America. I still have. I've always thought there's a destiny in America. My one unachieved goal in life was to be part of a smash hit in America. It didn't have to be whether I wrote it, sang it, played it, managed it. It didn't matter to me And that's the passion with Zed."